To say I disliked the first chapter of IT is an understatement. So, I wasn’t excited about a chapter 2. They’re doing it anyway. The trailer seems to follow the same beats as the first one sadly. Let’s get into it.

Now the Losers are grown and we see Beverly going into a woman’s house. Why? Who knows. She sits down to talk to the lady and we get a confusing scene. The old woman basically says something creepy and stares at Beverly for 10 seconds. She looks creepy staring at her, does Beverly make tracks? Of course not! That would require a using her brain. Something these characters seem to be foreign to.

Oh looky! We see shadows! Also, why are they trying to give Pennywise a backstory? He’s supposed to be a demon who preys on children’s fears. Not a former human who is now a demon. Oh dear lord help me I want this movie to disappear already!

Then we hear Skarsgard’s so-called scary laugh as some scary scenes play. I don’t care or remember these scares, which is already a bad sign. He says hello at the end in his failed impersonation of Screech from Saved by the Bell which is supposed to be scary I guess? It didn’t work.

If you liked the first chapter for some unknown reason, you’ll like this. If you didn’t like it like me, then you know to skip it. I will say though, the adults do a better job of acting than the kids. Which isn’t saying much, but I guess that is one good thing I can say about the trailer.

My Score: 1 Star, some confusing scenes with dumb twists and an obvious scare that doesn’t scare. I’ll pass. 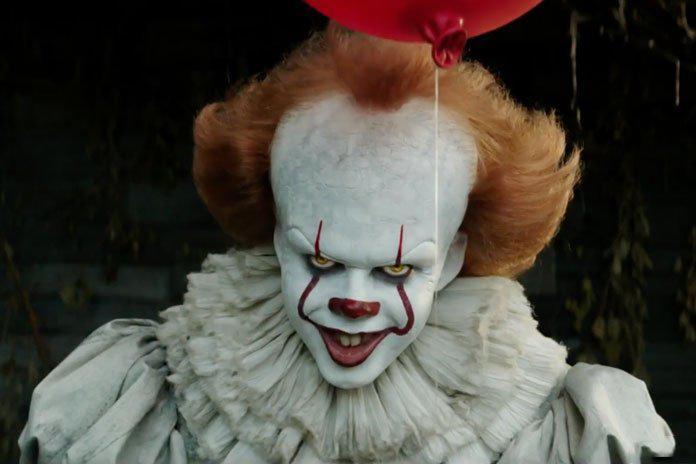 Ratings 1 Star: Avoid like the plague! Run for your life! 2 Stars: A decent movie that isn’t good or bad. 3 Stars: A good movie that just misses the mark of being great. 4 Stars: A real classic that you need to experience. Stephen King movies are a mixed bag. The Shining is one of the greatest movies ever made, but Sleepwalkers is a horrible movie. This is how it goes with King’s adaptations. IT is one of King’s most beloved works. The 1990 TV movie was highly rated back in 1990 when it was released. However, King was not happy with some of the elements in it. He wanted to do another version so he could make it closer to the source material. That is how the 2017 version of IT got made. Depending on whom you ask, it is either a great movie or an embarrassment to the cinema. Which group do I fall under? Let’s find out. Characters Georgie, Bill, Beverly, Ben, and the rest of the losers are back. The problem is the young actors who portray them aren’t that good. Some of the characters live up to the one-dimensional stereotype, (the bad girl, the nerd, etc), there is no depth to them and it makes it hard to care about what happens to them. They come off as typical bratty kids, not kids we want to see live. The worst character in the movie is Pennywise. Why on Earth would any child give this obviously creepy clown one second? Seriously? Tim Curry at least added a bit of charm to his portrayal of Pennywise. Bill Skarsgard puts on a one-note performance that he has no tone. Is he creepy? Funny? Which one is he?! His portrayal is all over the place. He has the subtlety of Chris Farley. Wait? He makes Farley look like Leonardo DiCaprio when it comes to subtlety. He tries too hard to come off as scary, and I don’t believe him for one second. Directing Andy Muschietti directed this movie, and he doesn’t do a good job. The colors are washed out and his use of shaky cam when Pennywise tries to be “scary” are so gag-inducing that it makes Michael Bay look like Orson Welles. We don’t need loud music cues, cheap jump scares and dumb shaky cam to scare an audience. Some scenes that were meant to be scary, but they didn’t scare me. Some scenes were supposed to be funny, but I didn’t laugh. Without a good atmosphere or tone, a horror movie will sink. That’s what happened to this movie. There is no tone or atmosphere. Just silly jump scares that do not scare or make you laugh. Which one is it supposed to be? I can’t tell! This movie frustrates me so much! This movie is such a forgettable, lifeless waste. Story

The story is the same as the book. It follows a lot of the beats of both the book and the mini-series. It follows the book more than the mini-series. However, that isn’t always a good thing. IT is a metaphor for childhood fears, but the annoying characters don’t pull is in, so we don’t care about what happens to them. Also, when one character dies in the movie, why does their relative act like nothing happen? How much time has passed since their death? Why not show the after effect of what happened? Let us FEEL the pain, but no, they can’t even do that right. That would require actually trying with the storytelling. That is too much to ask, isn’t it? I hate it when they make the villain the one you cheer for. The fact that he’s killing kids makes it worse. The story is decent, that isn’t the weak point of this morovie.

Screenplay This (along with the directing), will make or break a movie. That’s the biggest problem with this movie. The bullies are MORE annoying than the main kids. But, since you don’t care about the kids, you don’t care for what happens to the kids! Some are smoking to be rebellious. WHOA! I’m impressed, (sarcasm). The tone is all over the place. Some people say they laughed at this movie. LAUGH? This is a movie about a psycho clown killing kids. If you think that is funny, look for the people in the white coats, you need to be locked away. There were five writes for this movie. five! They could have used five more so they could nail down a tone, atmosphere, character, or story. This movie is a mess! The lazy jump scares show how little effort went into writing this. I’ve seen better writing from Fifty Shades of Gray! Yes, you heard me. At least that horrible mess had a tone to its screenplay. As bad it was, it was better than this abomination of a screenplay. Flaws Where to start! The directing is lifeless, the characters are annoying, the scares are cheap, the effects are bad, the humor is flat and the tone is all over the place! Can you pick a tone and stick with it for Heaven’s sake? I get a headache watching this movie. I made the mistake of trying to watch it again. I thought I was being too hard on this movie, but NOPE! I was too easy on it my first time. This is a trash movie with no tone, no heart, or scares. Any real horror fan who has seen better movies like Halloween, the Exorcist, or the Evil Dead has seen better than this. Heck, Halloween 3 is better than this movie! Why was this abortion of a movie a hit? I have a heart condition and I would rather watch someone perform open heart surgery than to watch this pile of a dung heap again. Final Thoughts There is supposed to be a part 2 to this. Oh JOY! If it is anything like this utter mess of a so-called movie then count me out! I wanted to like this, but when Stephen King gave his seal of approval, I should have known better. This is the man who liked the mini-series of the Shining better than the Stanley Kubrick masterpiece. King also thinks Sleepwalkers is a great movie, so I think I know how to find the good King adaptations. Whenever King doesn’t like it, it’s good! When he does like it, IT’S TRASH! Score 1 Star! What a trashy movie with no heart, tone, characters, scares, or craftsmanship whatsoever. Go watch Troll 2, that is a better-made movie. At least I know they were trying to make a bad movie with that one. Photo Courtesy Of: https://www.thesun.co.uk/tvandshowbiz/4396583/pennywise-the-it-clown-2017-stephen-king-halloween/

Bloody Disgusting did the article and according to an advertisement, the new IT trailer will debut this Thursday. I despised with a passion the first movie, so I could care less. But, if you enjoyed that abomination, then be prepared.